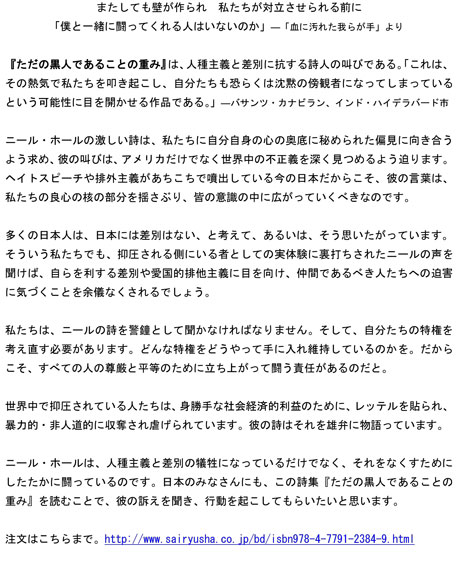 “before they build another bridge to divide us one from the other, who will stand with me and fight”

– from Blood On Our Hands

Weight of Just Black is a poet’s painful cries against racism and discrimination “This is poetry that scalds you into waking up to the possibility that you are perhaps one of those silent spectators.” Vasanth Kannabiran, Hyderabad, India

Neal Hall’s cries force us to face our own prejudices buried within our hollowed hearts. In this age of Japan’s erupting hate-speech and nativism, Hall’s words shake the core of our conscience. His cries compels us to look deep into injustice, not just in the U.S. but worldwide.

Many Japanese think, or would like to fool themselves into thinking, there is no discrimination in Japanese society. Neal’s voice, coming from his actual experiences as a member of an oppressed group, demands that we face our conscious self-serving discriminations and chauvinism we want to believe are at best, unconscious offenses against our fellow men and women.

We need Neal’s poems as our wake-up call to take inventory of our privilege, how we obtain and maintain it and our greater responsibility to stand up and fight for dignity and equality for all.

We take his poems as direct evidence how wrongly discriminated groups worldwide, to include Japan, are labeled, violently, inhumanely oppressed for self-serving socio-economic gains.

Neal Hall is not so much a victim of racism and discrimination as he is a resilient agent for their undoing, which we would like the people of Japan to feel, understand and be called to action reading this poems of Weight of Just Black.