In India as in most of the world, women are voiceless, second-class citizens with limited opportunities, constrained by institutionalized patriarchal constructs.

The Creative Arts Theater (TCA) was established in Kolkata, India by its director, Ramanjit Kaur.

Director Kaur uses theater as therapy to inform and empower women. TCA’s deep, self-probing, self-actualization theatrical training exercises demand that the participants connect with and bear their hearts and souls, anxieties, secrets, sorrows and joys. The training empowers women to find their voices, to gain the confidence needed to engage in the world discourse around them and to build productive mutually beneficial relationships with family and friends.

TCA training exhilarates. It awakens women’s awareness of and commitment to the importance of self and having an influential voice in our collective humanity.

Plays develop through improvisation and explore painful territory through collaborative dialogue across the arts. Productions are interactive among artists from different fields and between actors. Nowhere is this intensity more apparent than in TCA’s head-on approach to the plight of women. http://www.thecreativearts.org 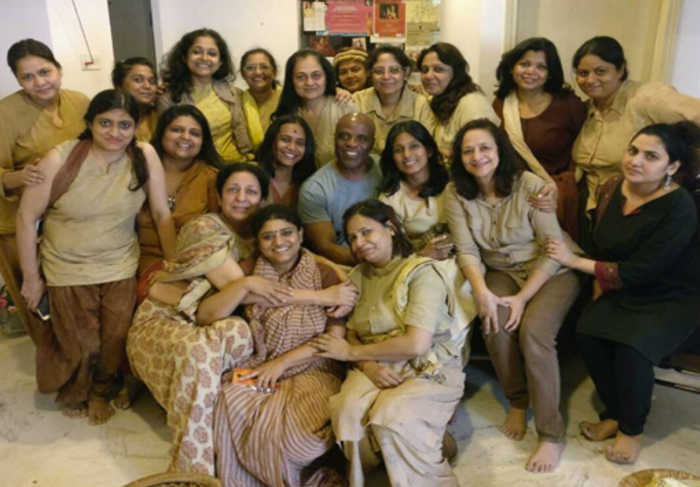 The female cast of Beyond Borders explores boundaries of nationality, caste, color, ethnicity, gender, sexuality; all gated walls men erect to garner socio-economic resources to ease their fears, insecurities, and hunger for power. Beyond Borders questions whether these boundaries are more important than humanity itself. Two poems by Neal Hall – Blood On Our Hands and Where Do I Sit– were used to help inform the play and provide dialogue.

Rarely does one have the opportunity to witness complete mastery and genius merge as one on the same stage. Beyond Borders’ director Ramanjit Kaur achieved this effortlessly in the most powerful way. On par with Les Miserables, Beyond Borders is one of the best theater productions I have ever witnessed. It is remarkable, a must-see production.

Its beginning grabs you, inches you step by step, act by act, snatching your soul from its chest; to have you exam it, its role in racism, sexism, class and caste offenses against our common humanity.

Each actress, one to the next, bore equally the weight of our offensives on their backs and shoulders across Borders’ stage. The powerful actresses committed their souls to telling, embodying, crying, bleeding, painting these offenses on the canvas of stage.

The narratives were powerful and informative. Words could never convey the gut-wrenching pain and sadness the actresses dug so deep from to capture hearts and minds. The ending left you wanting the beginning again.

I was honored to have my words play a role informing Beyond Borders.